We sold our house last weekend.

Although it’s a great home and I love it here it’s time to move on. I’m looking forward to a new start in a new home for Roxy and I – it will be much smaller, and will be an apartment rather than a house, but it will be home. I’m excited about it actually – having a new space to furnish and decorate! I’m hoping to find something that needs a complete renovation that I can make my own. I’ll let you know what happens.

But in the meantime I was looking back at how the house looked when we bought it 6 years ago. I thought you might like to see the before and afters. First I have to make something clear… the furniture in the before shots is not mine, I took the photos before the previous owners moved out. 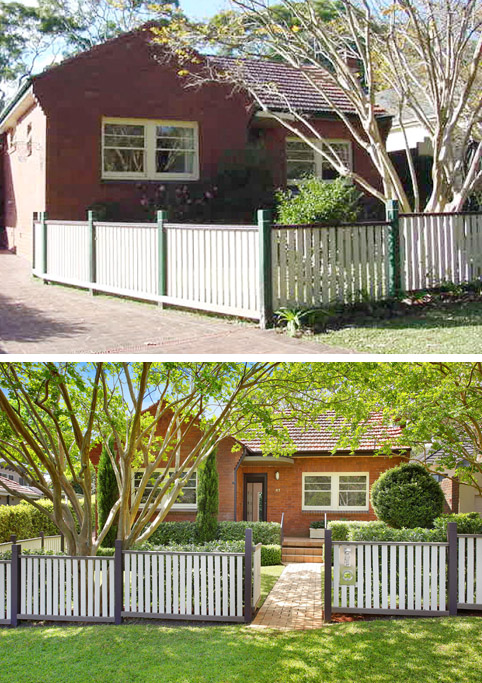 The front of the house before and after. The first thing we did when we moved in was pull out the hodge podge of plants and plant a much more formal garden. I love trimming the hedges and keeping them all neat and square (my Virgoan tendencies showing themselves!). We also painted over the heritage green, burgundy and cream with a dark chocolate/aubergine-hard-to-describe-colour, dark grey and an off white.  (After shot: Ray White, Lane Cove) 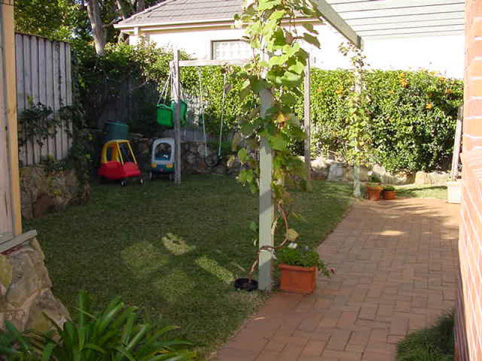 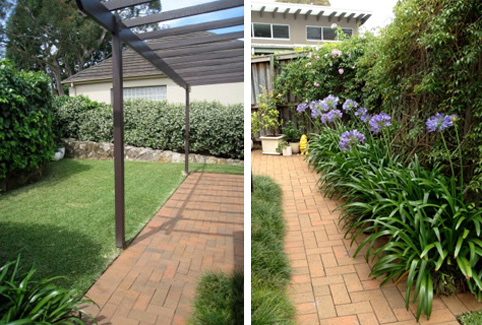 The back garden before and after. Again, everything is much neater and the pergola was painted. Although our garden is small by Australian standards it’s been all we’ve needed and I’m really going to miss it. 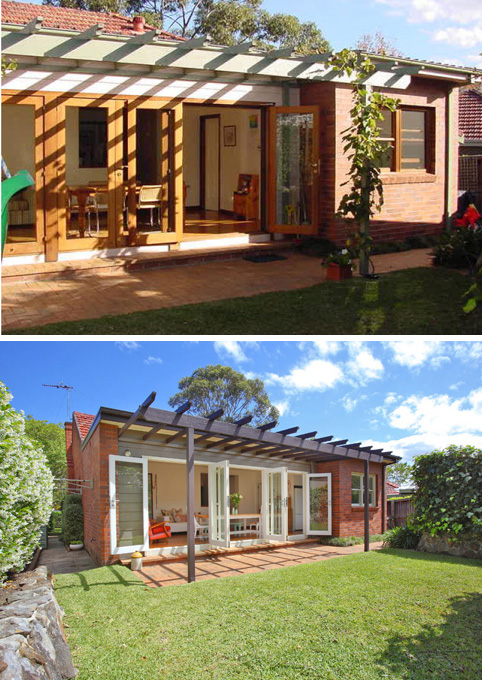 The back of the house before and after. (After shot: Ray White, Lane Cove) 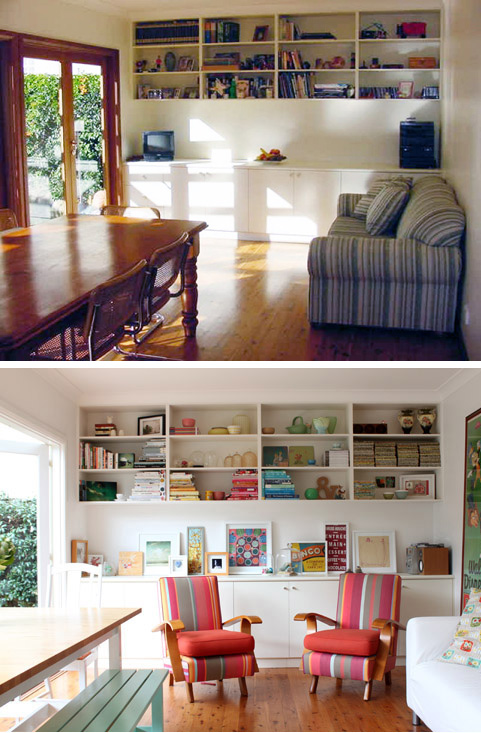 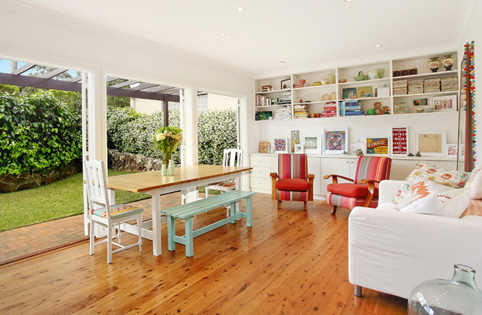 The living room before and after. The interiors were painted a bright white and the timber doors were painted gloss white, and the rest just comes down to furniture and styling. (Bottom image: Ray White, Lane Cove)

The living room looking back towards the kitchen. As well as painting we replaced the ugly laundry door. 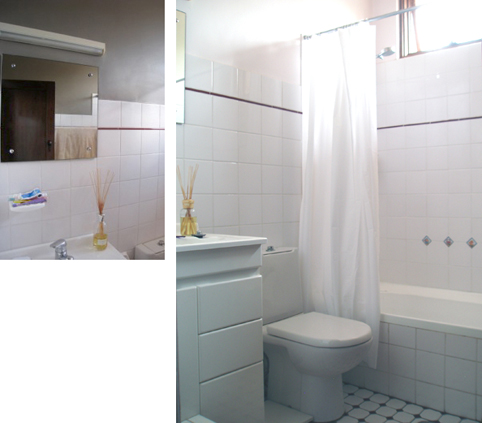 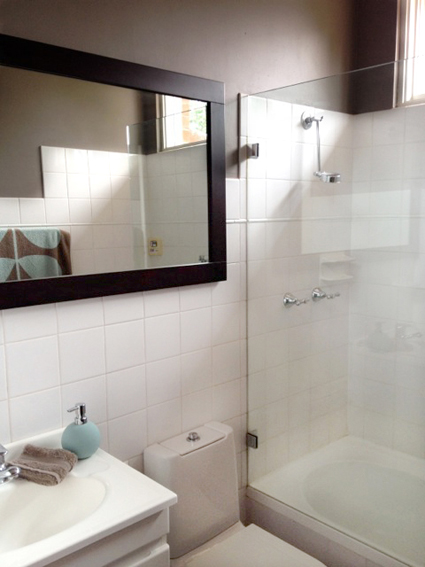 The bathroom. The top right photo is the before shot – the walls were pink and there was a strip of burgundy tiles as well as five diamond shaped tiles featuring various sea creatures. The top left image is a half way photo – the painting was done, but the old mirror and fluorescent light were still in place. We couldn’t afford to renovate the bathroom so we painted the walls in a beautiful colour called ‘donkey’, replaced the mirror, installed a frameless shower screen, painted the window frame white, and painted over the coloured feature tiles. 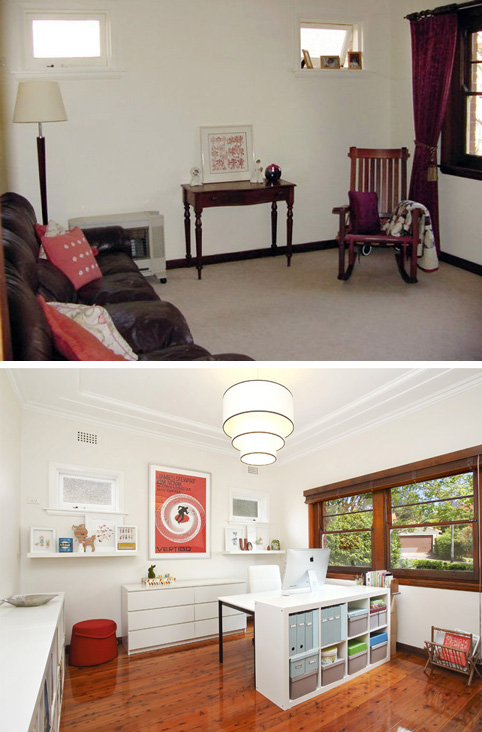 The front room of the house, before and after. Can I tell you again, that the furniture in the before photos isn’t mine ! We lifted the tired old carpet in the front of the house to find beautifully polished floorboards that had never been walked on. Bonus. Together the gleaming floor, new timber blinds, light fitting and a coat of paint gave this room (my studio/office) a huge lift. We retained the original timber features of the front of the house. The ceilings are patterned too which adds to the character.  (After shot: Ray White, Lane Cove)


So as you can see we didn’t do a big expensive renovation job, but managed to bring the house to life with a new coat of paint, some minor changes and an injection of colour. I do have to add that the look of the house has changed a lot in the last 18 months since I’ve been the only one who was making the decisions. As one of my friends commented “girly fabric heaven”! (which is much more evident in the lounge room and bedroom)
.
.